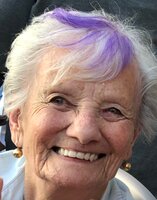 Bonnie Irene (Boyce) Gray Nassau, NY Bonnie Gray, 84, of Nassau NY, died June 16 at St. Peter’s Hospital, surrounded by family. Raised on Jefferson Hill Road, Bonnie was the daughter of the late Harold Boyce and Marion (Hewitt) Boyce. She was a 1955 graduate of Columbia High School. Bonnie later settled in the Village of Nassau to raise her three children. She was a communicant of St. Mary’s Church in Nassau and was a very active member of the church. She worked in the banking field most of her life from National Commercial Bank, where she met her husband, Jack Gray, to National Savings Bank and Citizens Bank. Bonnie enjoyed the figures, the people, and the hustle of Albany. Bonnie loved to dance at the Golden Fox and Northway Inn. Later in life, Zumba became a passion, dancing with so many good friends. Travel was another avenue of fun for Bonnie and her partner, Bill Cleary, going to the Caribbean, an Alaskan Cruise, Nova Scotia, and all over the great USA. Her daughter Colleen accompanied her on a week long trip to Utah, one of her favorite trips. Bonnie’s 7 grandkids were the apple of her eye, and she enjoyed being with them during any of their many activities. Bonnie’s moral compass was evident in her views and day to day life. She could be a dog “all bark and no bite”, but you knew where you stood. Always upbeat when answering the phone and sometimes being quite kooky around family made her so loved. Bonnie is predeceased by her parents, her brother Thomas Boyce, a sister Donna Boyce Dutcher, her ex-husband, Jack Gray, and her partner, Bill Cleary. She is sorely missed by her children; Michael (Kathleen), Colleen (Tom Fashouer), and Robert (Heidi), her grandchildren Andrew (Katie), Laura, Mac, Natalie, Isabelle, Alison, and Jackson, a cherished nephew, Shilo, and a new-found niece, Joanne Jensen. A funeral Mass will be celebrated on Wednesday, June 22, 1:00PM in St. Mary’s Church, Nassau. Relatives and friends are invited to call at the Thomas P. Mooney Funeral Home, 11 Elm St., Nassau on Tuesday evening from 4-7PM. Interment, St. Mary’s Cemetery, Nassau. In lieu of flowers, the family requests that you make a donation in Bonnie’s name to an environmental conservation charity of your choice.