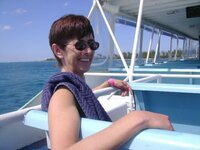 JUANITA JANE SMITH (McChesney) was born on March 10, 1955 in Lansingburg, New York. She passed away on July 11, 2018 at her home in Hawthorne, Florida after a long struggle with Chronic Obstructive Pulmonary Disease (COPD).

Juanita was preceded in death by her sons (John William Smith and Edward Thomas Smith), her former husband (Jeffrey John Smith), and her grandparents.

Juanita is survived by her eldest daughter, Kara (Curt) Seifridsberger of Wynantskill, NY and her youngest child, Scotti (Derek) Fisher of Hawthorne, FL.

Juanita spent most of her working life as a personal injury and medical malpractice paralegal in Albany, New York and Norfolk, Virginia before retiring in Hawthorne, Florida in 2016. Some would call her a "workaholic" because she'd show up at the office before sunrise, skip lunch and fight fiercely for her clients.

Juanita loved her children, grandchildren and great grandchildren well. She was hard headed and stubborn. She always wanted to meet the star of her favorite show, "Walker, Texas Ranger," and rarely missed a PowerBall lottery drawing.

She had a passion for the beach, trashy romance novels, pugs, cruises, convertible cars and online games. Everything she cooked used a full stick of butter and she was most relaxed sitting on the beach watching the dolphins swim in the sea. Her most prized possessions were a glass platypus gifted to her by her best friend, Genevieve Gioio-Pierce, and a glass lamp filled with seashells her grandchildren collected over the years. She liked to make a patty of raw ground beef to eat with way too much salt while she prepared dinner and enjoyed a good game of Rummy to pass the time, but her true love was going on cruises.

Before she passed, Juanita decided to donate her body to medical research. It was her wish to be cremated and forgo memorial services.