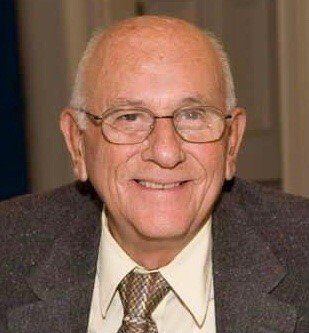 Please share a memory of Homer to include in a keepsake book for family and friends.
View Tribute Book
Homer P. LaVoie, 90, of Schodack, passed away at home on April 14, 2021. Homer, a beloved husband and father who always gave of himself through his love, laughter and unwavering support; was “Born in a Boat House” - the name of his recently published book about growing up in Tupper Lake and the Adirondacks. Throughout his life, Homer was an avid golfer, and also enjoyed many other activities, including bowling, vegetable gardening, making jelly with the concord grapes he grew in his yard and maple syrup from his own trees. He definitely had a green thumb. He was an entrepreneur – owning and operating Les Jeans clothing store for 10 years – and invented various useful household products. Homer spent a number of years in the credit union and banking industry, during which time he chartered a new credit union in the early 1980’s. He was well known in the community, served on the Town of Schodack Planning Board for nine years, and was a member of the Elks Club. Homer came from humble beginnings, where he grew up on the edge of Racquette Pond with his sister and two brothers, losing his own father as a child. Homer attended Tupper Lake High School where he played hockey and ran track and was always working throughout his young life. He loved being in the mountains with his family and was proud of his home town. After high school, he joined the Navy, serving during the Korean War as a cook on the U.S.S. Great Sitkin. He later moved to Albany and attended Albany Business College. After meeting his beautiful bride, Barbara, at the V.A. Hospital, he spent most of his life in the Town of Schodack. When relaxing, Homer liked trips to the casino, playing cards with family, and enjoying a cold Guinness. Most importantly, and dearest to his heart was spending time with his children, grandchildren, great grandchildren, and the love of his life, his wife Barbara. Along with his love Barbara Ann (Mantica) LaVoie, he is survived by his children Yvonne Coiteux; Renee (Jim) Bult; Lorraine (Michael McNamara) LaVoie; AnnMarie (Keith) Zimmermann; John (Janet) LaVoie; Lynn (Christopher) Stephens. Eighteen beautiful grandchildren, and six great-grandchildren, in addition to numerous nieces and nephews. The family would like to extend special thanks to Dr. Keith Rebehn, and Grace Sweet, RN, of Community Hospice, and the entire hospice team. In lieu of flowers, contributions may be made to the American Heart Association. Relatives and friends are invited to call at the Thomas P. Mooney Funeral Home, 11 Elm St. Nassau on Monday from 4-7PM. Funeral service will be private due to COVID-19 capacity restrictions.
Monday
19
April

Share Your Memory of
Homer
Upload Your Memory View All Memories
Be the first to upload a memory!
Share A Memory
Plant a Tree