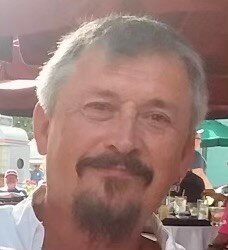 Please share a memory of Wayne to include in a keepsake book for family and friends.
View Tribute Book
Wayne Blair passed on away on February 4, 2022, at the age of 68, with his wife and son at his side. He is survived by his wife Cindy; Son Josh (Kiki); Grandson Matheo; three brothers; three sisters; and a large extended family. Wayne grew up in Nassau New York where he lived with his parents and seven siblings. Wayne moved to Columbia County in his early twenties and became a lifelong resident of Kinderhook. Known for his integrity and principles. Doing the right thing was very important to Wayne. As a child, Wayne developed a passion for music. This passion for music grew into a larger passion for all different forms of art including tai chi, karate, and painting. Wayne worked in the field of physical therapy. He was very successful in helping his patients achieve their rehabilitation goals. Further, he was well known for finding successful therapeutic objectives with the most difficult patients. After his retirement he could often be found at local nursing homes either playing music or teaching the residents tai chi. The only thing Wayne loved more than the arts was being with his family. Often his time with his family was spent traveling. This included traveling to Aruba, Japan, Greece, Scotland, England, Ireland, France, and many trips to Disneyworld. Wayne recognized and appreciated what he called the gift of “a good life”. He was loved and will be missed dearly. The family will hold a private ceremony to celebrate his amazing life. In lieu of flowers, and to highlight Wayne’s generous nature, the family asks that donations be made in Wayne’s name to the Shriners Children’s Hospital.

A Memorial Tree was planted for Wayne
We are deeply sorry for your loss ~ the staff at Thomas P. Mooney Funeral Home LLC
Join in honoring their life - plant a memorial tree
Online Memory & Photo Sharing Event
Online Event
About this Event

Share Your Memory of
Wayne
Upload Your Memory View All Memories
Be the first to upload a memory!
Share A Memory
Plant a Tree